Billion hearts were beating harder than the thrust of PSLV-XL which lifted MOM (India's Mars Orbiter Mission) into a  text book like (as ISRO officials call) 247 X 23,500 km orbit. Oh... by the way, the triple M treat continues (as a tradition of this post)... The pulse of the nation can be gauged by 25,000 likes just during the launch (~ 44 minutes), now 187, 000 and the count is ON for the official MOM's FB page ; also the ISRO site getting repeatedly hanged during the launch. The most heartening part of the successful launch in my view is: a bunch of primary school kids appearing in the TV- panel discussion  (mainly girls... another vow.. for the growth of India) were mesmerizing the local people here in this state by explaining each small step taken by MOM and its developers. To put it in president Kalam's words the young minds got ignited; it is indeed a Giant step for the entire nation. The fever of Mars odyssey has gripped the nation; every local newspaper carried an elaborate and technically accurate (thanks to the internet) reports running into few pages; while the quality of articles in the national level news papers reached almost a research class, credit to the intellectually strong minds of scribes and huge enthusiasm to learn about their nations proud moments. The one I liked the most is:


Though quite satirical, it certainly says tonnes of words that the bullock cart ridden MOM  is ready to catch up with the huge chunk of scientific achievements which are thrown open within this celestial window.

ASSESSMENT & MARKS (for the Instruments / Mission)
Nobody can have an iota of doubt on the homework and passion with which the entire Apollo teams had worked in placing a human on the Moon. But, space missions are unforgivable, history was a mute spectator for nail biting moments faced by Neil Armstrong and his team both at the time of landing and taking off the lunar surface.  Any prediction on a given mission amounts to unscientific; however the human tendency of predicting the future events; achievements against expectations is always persistent. It is in this spirit, the following discussion has been taken up:

Here are some interesting discussions on the expectations from the five payloads (instruments) MOM is carrying. Let us define a scale called f-10; basically a factor 10 scale divided into 3-parts. The first part (2-points) is weighed on the construction quality and other parameters to be qualified as space class (consuming less weight, power, volume etc), the second aspect (2-points) can be assigned due to its heritage class, which in a way is connected to the success rate in the past missions, finally the third (6-points) and most crucial point is to do with the scientific output which brings a kind of IMPACT to the mission (the definition of a MISSION).

MCC, TIS and MENCA are of heritage class and hence pick first 2-points each from the first category; while LAP, MSM manage only 1. The second category is purely dependent on the 0 1 logic on whether the instrument is that of heritage tag or not. The huge chunk of 6-points define the Impact factor of the mission. MENCA loses 2-points on the impact factor due to unfavorable orbit in locating methane 380X80,000km; but the front runner in this category is MSM, as this has been geared for Methane. However, the MSM loses 3-points (in the over all scale of 10) as this technology and the hardware itself is being tried for the FIRST time by ISRO; and has to mature into a heritage class.

Certainly, as argued earlier (in this blog), MENCA seems to be the front runner; though everybody have kept their bet on METHANE SENSOR FOR MARS, (MSM).

Mission
Another 10-point scale can be applied to MOM's odyssey to Mars. MOM has grabbed 3-points for the successful journey into the present elliptical orbit (247X23,500 km). The next set of complex maneuvering of taking MOM into helio-centric orbit explained very well by a report appearing in The Hindu (Report ) could take another 2-points. The crucial 5-points are to be grabbed for the ignition of LAM (Liquid Apogee Motor) after a hibernation period of 300-days. This is where the Russian/Chinese Phobos Graunt mission found it to be determental, recently.

An interesting aspect of MOM's scientific pursuit has been brought out by a report appearing in Deccan Herald, (Kalyan Ray's report). MOM seems to be taking a plunge by studying the comet C/2013A1, which happens to be around Mars vicinity as MOM approaches Mars; as I had EXACTLY predicted in my April 19th post below, that even the presence of Comet can be taken into the positive stride. The report also says that both the moons of Mars : Phobos, Deimos would be studied; after all the apogee point of MOM (80,000 km) is certainly handy in getting to study the further most moon Deimos.

One question always arises: Can we NOT reduce MOM's orbit around Mars? (below 377 km)...
WHY NOT..Even if it amounts to shell out the precious fuel MOM is carrying which would define the life time of MOM around Mars..  After all, you are aim is to get Methane; Let's provide MENCA a best opportunity to hunt down the elusive methane.

N.B.: The views presented here are only that of author. The predictions and related issues are only to estimate a reasonable chance of achieving an intended goal in author's view. This is by no mean any authoritative stand; and has NOT been done with any special purpose to promote or degrade any instrument or mission as a whole. 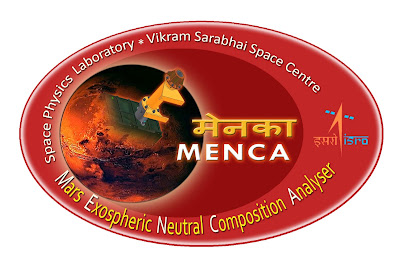